Despite throwing more money per student than anyplace on Earth, the United States’s educational system is rarely near the top. That should tell people that more money is never the solution, but that never stops them from spending more money anyway.

The reason computer science is so important is that it teaches problem solving skills. The specific programming language used isn’t as important as the skills people learn in the process of writing programs and breaking down large problems into step by step solutions.

More importantly, schools should be focused on teaching students how to solve problems, not endlessly debating about whether to teach creationism in schools. Creationism simply teaches students to stop pursuing answers. After all, if God created the world in seven days, 6,000 years ago, there’s no need to question this belief and search for actual proof. When you teach students to stop looking for answers, you stop teaching. It’s that simple.

That’s why computer science should be mandatory in schools whether students learn BASIC, Java, or Python. Computer programming gives students immediately feedback on their solutions, which can be frustrating initially but not so much as doing something wrong in math or biology and not realizing you did anything wrong until you take a test.

Computer programming provides immediate feedback so students know exactly what they know and don’t know. Then they can keep searching for answers.

The whole point of education isn’t to teach facts (or myths), but to teach students how to learn, and computer science is a great way to do that. the fact that the United States doesn’t make computer programming mandatory is simply overlooking a tremendous teaching tool that no amount of spending can replace.

Programming teaches people how to think, but for many people, that’s the most dangerous use of schools when they would prefer to teach people how to obey instead.

To read more about the need for computer science in American schools, click here. 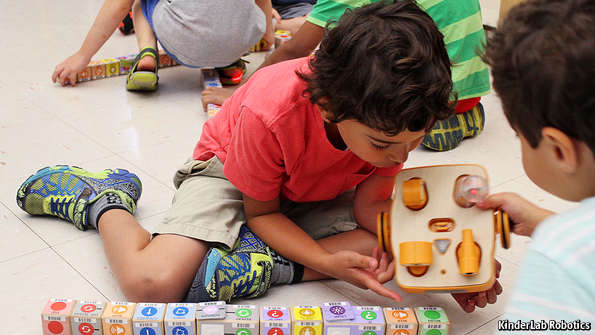 There’s a growing trend to teach computer programming as a basic skill like reading and math. While Britain, Estonia and Finland, are making programming part of the school curriculum, the United States seems to think programming should be an optional subject. That likely means generations of kids growing up and not knowing the basics of programming, which leads to computer ignorance and computer illiteracy where you risk not understanding how computers work or what they can really do.

Fortunately that may change. Marina Umaschi Bers, a psychologist at Tufts University, near Boston, has created KIBO, a toy that lets kids string physical blocks together. Each block contains an instruction that the child can then scan using the KIBO toy. Based on the instructions organized by the building block sequence, the KIBO toy then follows those commands such as moving forward and then turning right.

The ultimate goal is to raise generations of kids unafraid of computer programming and able to take problems apart and solve them in logical steps. Programming is a useful skill that everyone should learn, not just those interested in computer science. The more people knowledgeable about computers, the better off everyone will be.

Hopefully more governments will understand the pressing need to teach basic programming concepts to kids and everyone for that matter. Programming isn’t just a specialized skill for a select few but a necessary skill for everyone you understand.

To read more about efforts to teach kids how to program, click here.

Video Games Are Good For You

Most parents believe that video games waste time when kids should be engaging in healthier activities such as school, outdoor play, sports, and community service. Yet research is quickly proving the theory wrong and illustrating that gaming can be a beneficial and well-rounded part of a healthy, balanced media diet.

Moreover, due to their interactivity, at odds with passive mediums such as television, kids’ video games can actually be one of today’s most powerful tools for sparking learning and creativity. But while gaming offers tremendous potential, it also bears remembering: It takes a running commitment from parents and teachers to actively follow and participate in the pastime to make it a truly safe, healthy, and rewarding part of household life.

“Games can definitely be good for the family,” says Entertainment Software Rating Board (ESRB) president Patricia Vance. “There’s plenty of selection. Oftentimes I think parents feel that they’re not because video games in the media are portrayed as violent, and hardcore games tend to get the lion’s share of publicity. But parents also need to be comforted knowing that E for Everyone is by far largest category [of software]. Nearly 60% of the almost 1700 ratings we assigned last year were E for Everyone, which means there’s a huge selection of games available that are appropriate for all ages.”

What’s more, kids aren’t the only ones who stand to benefit from button-mashing (and not just because the average player is now 37 years old and more adult women play than teenage males). Research from the Office of Naval Research (ONR) actually indicates that video games can help adults to process information much faster and improve their fundamental abilities to reason and solve problems in novel contexts.

A study published in a recent edition of Archives of Surgery also says that surgeons who regularly play video games are generally more skilled at performing laparoscopic surgery. Findings by Daphne Bavelier, a professor of brain and cognitive sciences at the University of Rochester, likewise reflect that video gamers show real-world improvements on tests of attention, accuracy, vision, and multitasking after playing certain titles. No surprise there, confirms Michael Stroud, a professor of psychology at Merrimack College, who explains that games’ active demands on our attention and working memory all map well to performing similarly complex real-world tasks.

What’s more, experts say, serious games and virtual environments may be the future of education. Not only do students find gaming more approachable and engaging than lectures and PowerPoint presentations, they insist on them. Simulations also provide a more inviting and lifelike context in which to make choices, see results, and apply learning in real-time. The Federation of American Scientists (FAS) states that kids actually need more, not less, video game play as a result. Citing games’ ability to prepare workers for the increasingly competitive global job market, the organization says that games promote strategic thinking, interpretative analysis, plan formulation, and ability to respond to change.

The Game of Life

One of the classic board games is “The Game of Life.” This game has gone through several changes to update the board, salaries, and rules, but the game remains the same. The object is to go through life, starting as a young high school graduate and choosing whether to go to college for a possibly higher paying job as a doctor or lawyer, or going straight to work and beginning a career as a police officer or an entertainer.

Besides forcing players to choose between going into debt to go to college or earning money right away, “The Game of Life” also shows the consequences of raising and paying for multiple children as you progress through life until you reach retirement age. Although the game is mostly chance, it does teach players about making decisions, handling money, and what to expect through different stages of life.

Although you can still find the board game version of “The Game of Life,” Electronic Arts now offers an iOS version of the game so you can play it on your iPhone, iPod touch, or iPad. The iOS version remains faithful to the latest version of the board game while freeing you from handling money, remembering rules, or moving the pieces yourself. All you have to do is spin the wheel, play the game, and watch the computer take care of all the details while you get to enjoy moving through “The Game of Life.”

“The Game of LIfe” can teach anyone the basics of money management, risk, and the high cost of raising a family. If you want to kids how college can lead to a higher paying job, there’s no better way of sinking this point home than letting your kids slowly go bankrupt while other players, who did go to college, thrive with their wealth.

There’s a reason why “The Game of Life” has become a classic because it lets everyone explore the choices we all make going through life. Teach kids the value of making correct decisions that can alter their life forever and “The Game of Life” can keep kids from maintaining their short term focus and get them to think about the future, even if it’s only a game they can play on their iPod touch, iPhone, or iPad.

Reason to play: Teach kids how to make better decisions in their own life and see the consequences of making poor decisions.